First band was playing and they were a good Grind band. I was into them and so was the little bit of people that were there so far. Pretty good. a great way to open the show up. No idea who they were but pretty good.


Up next was one of my favorite local bands got up. BruceXCampbell(badass name i know). They started playing and the crowed seem to dig em. They use to be a 3 piece. They lost the Pig Squealer/bass player. Now they have a hot chick as a bass player,I think she was in a punk band called Joe Pesci. They also got a 2nd guitar player who played in the first band and is a former drummer of Suffering Luna. They really need to find another squealer . They were fuckin amazing when it was duel vocals. It hit ya like a boomstick. You must pick there album We Are All Kamikaze ASAP! Chances are you'll find it as S-Mart.

Now the band I was looking forward to seeing for a 2nd time was my favorite local band. And probably my favorite Grindviolence band in general  ACxDC or Anti Christ Demon-Core. These guys kick so much ass. First time I saw em they blew me away. Singer Sergio goes totally nuts and jumps around with the fans. These guys are loved worldwide but still aren't big enough for a full tour. This is band is gonna get places for sure. I was begging people to get these guys on the Anal Cunt bill,didn't work but at least they got on Wormrots. They played for like 6 min. Download ACxDC's discography now! You Had It Comin'
Set:
Turtle Power
Fuck It Dood
Dumb and Dumbshit
Milk
New Song/Breakdown
T-Shirt
We Kill Christians

So LA got its third chance to see Wormrot of Singapore. I told you last month at Scion Fest how fuckin' much I loved them and how nice they were. Well since then they've released their second album Dirge for free download. Thats how nice they are. When I went to go tell them to kick ass today and how much I loved em at scion fest,they right away said how they remembered me. Now the tour was supposed to be finished. But since they really loved this place they decided to do their last show here for cheap(also shot their first music video here). They played right away and they were great as always. The audience(mainly young adults) were being lame. The pit went crazy and hard but you couldn't tell who was just having fun or actually trying to fight. Big macho guys choking each other getting butt hurt cause they accidentally got kicked in the head. Whether your a macho man or a wimpy shrimp like me,you have to know what your getting your self into at these shows. So that kinda pissed me off. The band kept playing and I kept screamin'. During the set I got a bloody nose,Punched in the jaw,kicked in the head,got my glasses bent,and someone even managed to pop one of my pimples. They were sick as fuck. At the end I hugged em and tried to get a setlists. No luck,they apologized cause I didnt get one. Thats how fuckin nice they are. I told the drummer that Dirge is the album of the year. Big Smile lit up on him. They also told they will be back next year,you better go! Wormrot loves America,Wormrot we fuckin love you.

So after they kicked us out. Luckily the place had a change of heart and let everyone there who was gonna come back for Anal Cunt get half off. Me and my girlfriend to McDonald's so we can eat,pee,and poop. We walked back and they let us in. We waited a bit. Most people who went for Wormrot had left and here come the old timers. Believe it or not,the people this time were nicer and more civilized. So first DeathGrind local band plays. They're called Cotex Nektur. Name doesn't catch my attention but I check em out anyway. Lead singer looked like Phil Anselmo. Everyone was young and bold and they played reallly good DeathGrind. Think Death mixed with Repulsion. Singer ended up being in every other bands pit. And like all good local bands should be,they gave thier demo out for free. It has like 9 songs. I cant find a pic of them,but I will be supporting these guys.

Next up was a Tech DeathGrind band called  Bedlam Of Cacaphony. Hehe caca...anyway they were cool. People really seemed to dig em. They have a little reputation already playing with Cattle Decapitation and others. I dig em. A-OK guys.

Now The Touring bands started. By this time I was pooped and I wanted my dose of AC already. These guys went up and I noticed it was the same singer and bass player from Panties. And the guitar player was also the bartender there. They said they haven't played in a year and a lot of people were excited for them. They played pretty good Grind and the singer still reminds me of Ice Cube. They were good but id rather listen to Panties. Still a great band tho and Id recommend anyone to check em out. Plus any band that sells shirts for $5 is cool is my book. Ill be seeing them again in June with Doom(which I hear people are complaining about). 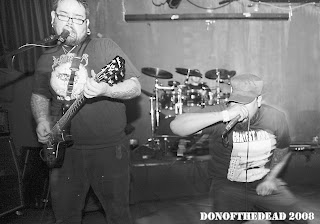 Maryland's Strong Intention was next. My friend told me they were good and I agree. Grindviolence done by an old man is great. Half the place seemed to love em. I wanna tell you more but I was just headbanging. Check em out. And I always find it strange when I see an old man play Grindcore. Guy took his shirt off and screamed for his coffe.

Up next was super group Murder Construct. A band thats been in the works for many years but barly started playing. How super are they? They have memebers of Cattle Decapitation,Exhumed,Phobia,D.I.S.,Fetus Eaters,Bastard Noise,Bad Acid Trip. Now ya know we got some real good DeathGrind. The place went to a pit and I had trouble seeing. They only have a EP out and you should get it if your into all their badass bands. Hopefully ill be seeing them again.

Now to the part that matters. All day I was nervous and excited of seeing AxCx. Like a roller coaster,its gonna be fun but all hell can brake loose. I finally got to get an official real shirt. Most of them were based on their new parody Glam album Fuckin' A. I got one with the logo and around it it said :Junkie,Raciest,Alcoholic,Asshole,Troublemaker,Rockstar. Plus it had some silhouettes of hot chicks in random places. Back had a censored version of the new infamous picture of singer,legend,role model Seth Putnam and tour dates. How great is this man? Heres the uncensored pic.

I got my girlfriend a tank top that said the band name all cute. Back said: Groupie,Slut,Junkie,Scum. We sat and my friend texted me "He's here!". Right away I go back and I see the king himself. We made quick eye contact and I got nervous. I had asked the merch guy if he was gonna punch me or anything. He said nah that hes the coolest guy ever. Right when we're about to ask for a picture he stood up and almost fell. He grabs on to my friend's shoulder hard. He's fucked up on some hxc shit right about now. He later goes back and has all these random sluts kissing his ass. We finally ask him for a pic and he says yes. I never smiled so big in my life. I ask about a Siege reunion. He said "I Doubt it  maaaaaaaaaan!". He kept lifting up his shiny glittery pants to show off his tattoos. The band was setting up.

Seth marched in the room(with help of coarse) with a shitload of the fans to the stage. He got on and people were yelling and screaming for him and he left. 5 min later he comes back and his friend has a chair. He was too fucked up so he had to sing on the chair like he did when he first got out of his coma. He started singing and the place went nuts. Girls began to hug him tightly and try to sing along. We all started screaming the offensive lyrics a long to to him,"Niggers!,Rape!,Haha!" He was still in charge on stage in his throne. Girls were all over the place. As well as us guys. Some random drunk girl who seemed younger than me was asked by the guitar player to flash us. She did. Her dumbass kept being on stage and the guitar player would randomly grab her and kiss her. She was all fucked up. The thing I loved most about this was they didn't have a setlist. They played whatever they wanted and what we wanted.They finished,then they decided to do a Manowar cover. They asked the sound guy for another song but they wouldn't give it to them. They did it anyway with 311 Sucks. Surprisingly they did play the full hour(or around there). Most people were betting 20 min max. Seth stood for that and people still surrounded him like the badass he is. Check out both albums they released recently Fuckin A' and Wearing Out Our Welcome. Set list included:
Body By Auschwitz
Haha Holocaust
You're A Cop
Beating Up Niggers That Sell Fake Crack
I Lit Your Baby On Fire
Unbelievable
Pepe,The Gay Waiter
Flower Shop Guy
Delicious Face Style
Im Still Standing
Van Full Or Retards
Hitler Was a Senative Man
Crankin' My Bands Demo on a Box at the Beach(sang by some random old guy and a little help from me)
xxxxxxxxxxxxxxxxxxx
Gloves Of Metal
xxxxxxxxxxxxxxx
311 Sucks

BEST SHOW EVER
Posted by TurtlexBoy at 5:50 PM